The viral sensation of the past decade, now with a scientific eye.
No self-respecting food blogger doesn't have a recipe for bacon. Ok, not every recipe has to be an extravagant meal.
Prep:
There isn't really any prep. De-frost bacon if it's frozen. Make sure your stove works and can produce heat to heat up cooking vessels.

Sometimes (as shown in the pictures), I like to cut the bacon slices in half so they fit better in my pan (depending on which pan I'm using). Yeah, I know the recipe calls for a straight-wall and the pictures show a regular angled frying pan. Don't @ me.

Lay bacon in your straight-walled frying pan and cover with water so the pieces are just submerged. Don't add any excess oil to the pan or anything.

The Business:
Over a medium-low heat, cook the bacon and water until the water evaporates. You do not have to flip the bacon at this point, as you are rendering fat, and browning will not occur until you have a dry environment. This can easily take 20 minutes, but be patient if you want to be rewarded with crispy bacon. If you feel like your temperature was too high, or if your bacon is particularly fatty, feel free to add some more water as to keep it mostly submerged.

Once the water has evaporated (you should also hear an audible change in the sounds coming from the pan, transferring from a bubble of water to the sizzle of oil), slowly turn the heat up to a medium-ish heat to begin browning and crisping the bacon. Again, this should be after at least 20-25 minutes of cooking. Take your time.

Feel free to turn the bacon as much as you like at this point, ignore the conventional wisdom of "only flip it twice". There is hardly any water or fat content left in the bacon slices at this point, and they will undergo the Maillard reaction quickly, so keep an eye on it. Again, you should be hearing a sizzle rather than a bubble, your ears are important here.

Once sufficiently browned on each side and crispy, evacuate from the pan and drain over a wire rack and/or paper towels.

This method can also be applied to chopped bacon chunks to make the crispiest lardon of your life, perfect for soups or salad topping. You're welcome. 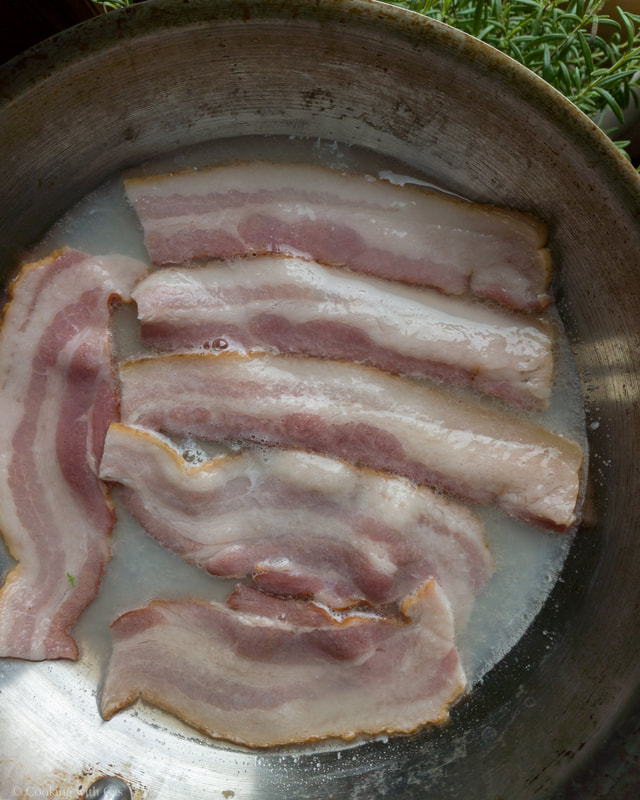 Bacon, mostly submerged in water. Yeah, I could have used a little more. Feel free to add water as it boils off.