Thick and hearty soups are perfect additions to your Fall and Winter cooking repertoire.
Cauliflower boiled in water for 30-40 minutes isn't likely your first mental image when you envision `flavor', `complex', or `satisfying'. Let's change that.
Prep:
Thinly slice the shallots and garlic, set aside. Chop the bacon into 2/3-3/4" chunks. If you don't know already, bacon chops very well when it's still a little frozen, as the fat is much more solidified than it would be at room temperature (thanks saturated fats!).

Remove the core and chunk up the cauliflower into manageable pieces. Reserve about a third of it for frying in bacon fat (you know, to make it delicious). We're cooking the remaining 2/3 of it in stages for a nice complex flavor (also thanks to Dan Souza from ATK for this idea and the science behind it).

The Business:
Grab a large sauce pot and put the 4 cups of water onto boil. Once it has reached a healthy boil, drop about half of the large chunks of cauliflower into the water. I hesitate to tell you to salt the water prior to boiling, because we'll be adding a lot of salty elements (bacon, pecorino romano cheese, and actual salt), so let's not go overboard with the one-note-ness. Boil this cauliflower for 20 minutes, and start in with the aromatics and garnish.

In a medium-sized fry pan, slowly render the fat out of your bacon. Do this over low heat as to not burn the bacon - you wouldn't eat burn bacon, nor would you burn it intentionally because you're not a novice, are you? Evacuate the bacon, and reserve the fat in a small bowl.

Turn the heat up to medium on the frying pan, and add back 1.5-2 Tbsp of the reserved bacon fat (you should have at least 4 Tbsp reserved, if you're looking a little dry, feel free to supplement it with some olive oil or butter if that's your dig). Start sweating the shallots. You're not looking for caramelization to really occur here, so keep things moving. After they start to lose their signature purple shallot color, toss in the garlic and fry for 30-45 seconds, until softened slightly. This is all getting pulverized in the blender later so don't worry about the texture. Evacuate this to another small bowl (or you can just go ahead and throw it in with the boiling cauliflower).

Hopefully that took 15-20 minutes, so by now you should be ready to toss the remaining large chunks of cauliflower into the boiling pot of water . Do that now; we'll be cooking this second batch of cauliflower for another 10-15 minutes, just enough to get it soft (let the first batch hang out and continue to cook, don't strain it or anything).

If your pan is looking dry, add another 1.5-2 Tbsp of bacon fat (we'll wind up using most of it, don't you worry), and turn the heat up to medium-high. Toss in the smaller chunks and caramelize. This shouldn't take too long at a high heat, just keep an eye on it so it doesn't burn and become bitter. Again, evacuate to a bowl (you can honestly toss it with the reserved bacon lardons).

After the second batch of cauliflower has cooked for 10-15 minutes, CAREFULLY place it into your blender and let it rip, slowly at first to break up the chunks, and then on high power to really get at it. You're looking to get a smooth puree, so feel free to let it run for a few minutes. Vitamix blenders with the `soup' option will do quick work on this, and keep it still very hot via friction, but do whatever is necessary to get a creamy white soup. Check for your desired consistency, and add more water if you feel like it's more of a paste than a puree. It's your soup world; I'm just living in it.

Serve it up in a bowl, obviously. It's soup, so watch the temperature as to not destroy the roof of your mouth. Unless you enjoy that sensation (I'm not going to judge).

Garnish with chives, the bacon and toasted cauliflower florets, chives, and drizzle a healthy stream of bacon fat (for flavor and extra salt). Finely grate pecorino romano cheese on it as you eat it (you don't want this hard cheese seizing from being too hot). 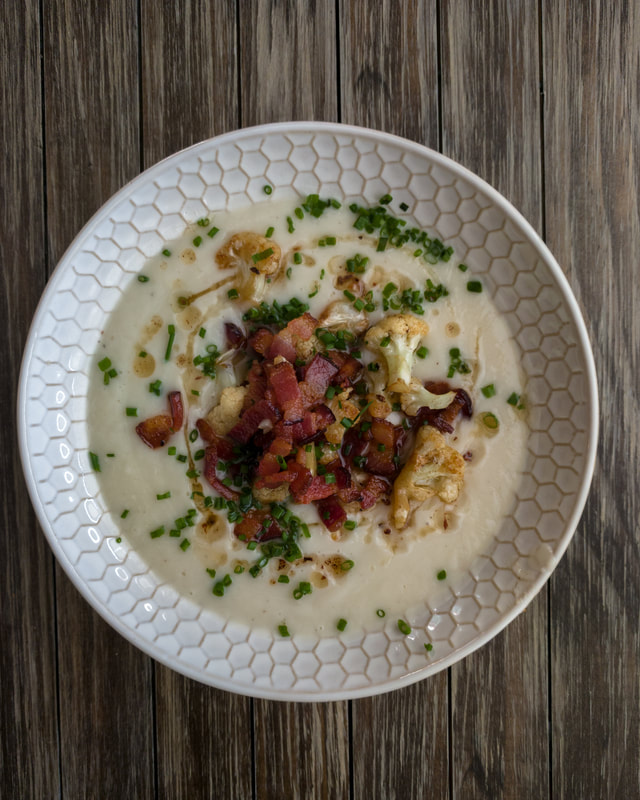