The holiday classic, turned upside down, and this time, not out of the can.
It's almost cliche to include Thanksgiving-like recipes in mid November, AND to call them deconstructed. Alas, here we are.
Prep:
In the bottom of your stand mixer bowl, bloom yeast in milk until foamy (for about 5 mins). This is totally optional if you're confident your yeast is still alive, but...it's the insurance policy you'd wish you had when tomorrow morning comes and you're left with underwhelming AF cinnamon rolls.
​
Meanwhile, in a separate large bowl, combine the flours, salt, and sugar and prepare to dump it in the stand mixer bowl. Mix the wet and the dry ingredients together by hand (your bread hook will simply take too long to incorporate the dough, and it'll be going for 30 minutes anyway, no need to stretch it out to 40. You'll look at this `dough' and think: "holy crap I need to reevaluate my math, surely there isn't enough liquid to hydrate the dough". That's where you're WRONG, KIDDO. The pumpkin puree you'll be using has enough liquid and moisture in it to do the job.

Now we start enriching this dough with things that make it taste delicious. Turn on the stand mixer onto its lowest setting (usually 'Stir') and add the single egg yolk. Let that get absorbed into the dough and then add the full egg. You'll sense a pattern here. We're adding ingredients to the dough to create (ESSENTIALLY) a bread emulsion. Dump all of it in at the same time and you'd be left with this tangled mess of (again) `dough'. Not good. Drop a spoonful of pumpkin puree into the batter, let it absorb, and then repeat until you no longer have pumpkin left. Depending on how wet your pumpkin puree is, you may have to start adding spoonfuls of bread flour to get this back into a cohesive ball around the hook. There's no science to this. It's all feel

Now comes the tedious part. Grab some headphones and put on some music. With the stand mixer still on the lowest setting, start mixing in cubes of butter one at a time, waiting until the previous piece has disappeared into the dough fully before adding the next. The dough should be looking more and more slack as it spins around the bowl (ideally you'll be hearing it slightly slap the sides every turn), and will look like a weird Newtonian fluid (look it up on YouTube) if you pause the mixer and lift the head. Once ALL of the butter has been absorbed, turn the mixer up to medium-ish speed and allow it to really get thrown around for 10 minutes. The sides of the bowl should now be clean, but a reminder if at any point you've had trouble getting a cohesive mass of dough around the hook, add more bread flour (a little goes a long way since the hydration in the dough is so low).

Cover your bowl with plastic wrap and set on the counter for an hour to 90 minutes or until roughly doubled in size. All you're looking for is some amount of stretch. While that's going, prep the filling and icing.

Prep (filling/frosting):
Do I really have to spell out these steps? Mix the spices and sugar. Place into an airtight container. This stuff is magical and goes great in coffee, as your basic self might imagine).

Same with the frosting. Whisk it together, vigorously, to break up the chunks of "cream cheese" and create a velvety smooth frosting. I tend to make it thinner than I expect because you'll put this back in the fridge to solidify. You don't want to be working with plaster of Paris after all.

Prep (Pumpkin Brioche, cont'd):
On a lightly floured work surface, turn the dough out and give it a gentle knead to bring it together. Shape it into a big puffy rectangle and dust the top with flour. Begin rolling out the dough into a large rectangle. Since your mileage may vary on the amount of dough you have, just roll it out to somewhere between 1/4"-3/8". Not so thick where your rolls will wind up chonkers, but not so thin that you can read an ebook through it. You thought I was going to say newspaper, just admit it.

Dust any excess flour off the dough (you want it to be somewhat cohesive as it has to stick to itself), and sprinkle the sugar and spice mixture all over the rectangle, going all the way to the edge. Be liberal with the stuff. It'll melt, and remember, there's not much sugar in the dough This is one source of sweetness in the entire roll, so don't skimp. Make more if you have to.

Starting with the longest edge of the rectangle, tightly roll the dough over itself for that classic cinnamon roll look. Carefully slide onto a baking tray and optionally place into the fridge for 10-20 minutes to firm up. This will help you slice it if your knife isn't razor sharp. Slice your log of dough into roughly 1"-1/25" slices and place into your baking tray, leaving 1/2" gap in between each to allow room to expand. The last thing you want is an indistinguishable mass of dough after you spent so long to roll everything up.

Cover with plastic wrap and refrigerate overnight. Brioche dough is a highly enriched dough, so expecting it to rise and ferment in a reasonable, same-day time frame is generally a pipe dream. So a cold, slow ferment will do it. Plus it'll add the slightest amount of tang to it, and still preserve the quality of the dough.

The Business:
The next morning (or I guess later that night if you did this early morning), take your rolls out of the fridge and preheat your oven to 375 deg F.

If you can find a warm spot in your kitchen, then great. place the pan in that spot so it can begin its final proof. Alternatively you can place these in a proving drawer or warming tray, whichever. You just want to make sure your dough has expanded to fill most of the gap that you were judicious in making in the pan.

After the rolls have proved, place into the preheated oven and bake, uncovered for 20 minutes. Check on them after 15, depending on your oven. Note that we skipped the traditional brioche egg wash because these are going to get slathered with a cream cheese icing anyway. If you like a little extra caramelization and crunch, feel free to leave them in for another 5.

Allow to cool on the counter completely before frosting unless you really like a goopy mess. Decorate them however you like, add sprinkles, dust with more magic PSL powder, do whatever you like!

These reheat very well in a low, gentle oven. Enjoy! 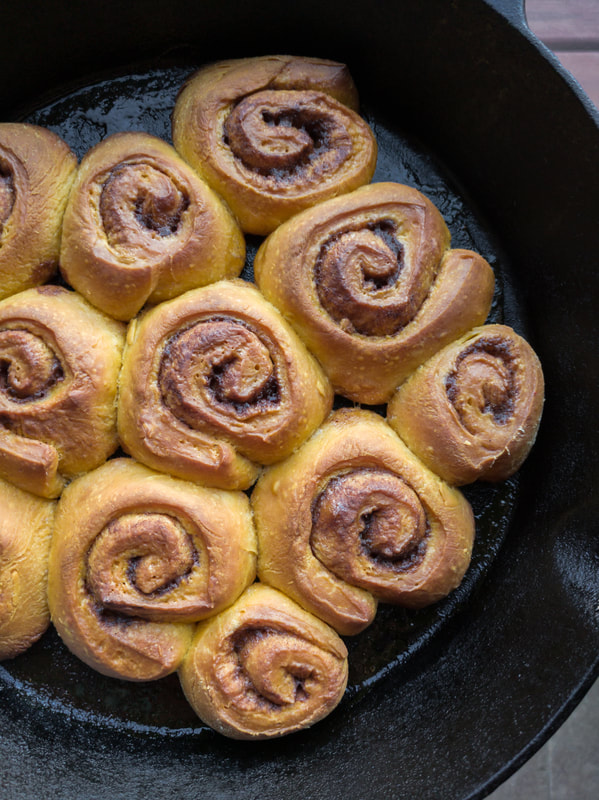