The official dish of Louisiana should become a staple when you need some hearty, down home cooking.
Much like my shrimp and grits recipe, this is definitely one of those back-of-your-pocket meals that you can usually whip up for A) cheap and B) fast. Growing up in relative proximity to both Louisiana and low-country culture (and subsequently the Gulf of Mexico), getting quality shrimp was fairly easy, and the bigger the better with this boy.
Prep:
Chop your veggies (bell pepper, onion, carrot, and celery).

Chop tomatoes (or use the damn can opener if you're feeling lazy).

Chop okra into manageable chunks (or leave it as is if you're taking the frozen route).

Slice andouille sausage into relatively thin slices (you want this to crisp up well and render out some of its fat content).

It's soup. There's not much prep.

​Preheat a cast iron dutch oven over medium heat with a healthy amount of olive oil.

The Business:
Fry up the andouille sausage until you get some solid color on it. Remove the sausage, but retain the oils left behind in the pot in a separate bowl. You'll need them.

Add some more olive oil and sweat your aromatic vegetables in that. This should take 10 minutes or so, and you're not looking for char on these. Evacuate the veggies.

Add that reserved olive oil and andouille fat back into the pot and make a roux out of the oil and roughly equal parts flour. But WAIT you didn't just toss that flour in and stir it like two times did you? Get back there and cook that roux until it's dark. I mean, REAL dark. Cook that flour until it's brown. Turn down the heat if you have to keep it from burning, but just make sure it's thoroughly cooked. Look up any video on gumbo roux and you'll see some DARK stuff. You might even say it's black magic.

Add the cooked aromatics, tomatoes, and okra to the roux and get the veggies coated. Start stirring in beef stock, and add the anise powder, and cayenne pepper. You'll start to see everything thicken up rather quickly because of the roux, but definitely add more stock than you expect. It'll continue to thicken because of the okra. Trust me.

Cover and simmer until you're ready to eat. Roughly five minutes before you're ready to eat, toss in the andouille that you definitely haven't been snacking on, as well as those delicious shrimp. You don't want them to overcook and become rubbery.

Serve with rice and chives. Dig the hell in. 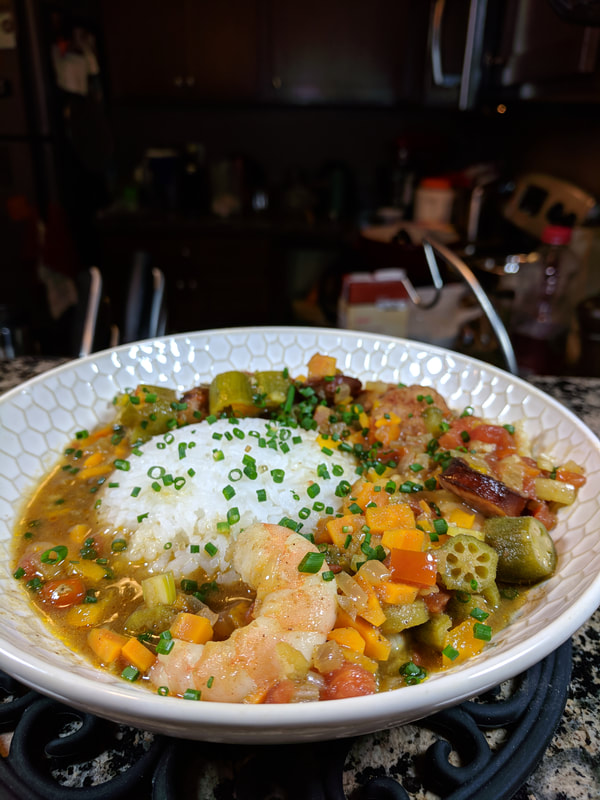