Smoky. Acidic. Spicy. Perfect for tepid summer nights.
Contrasted with the flossy, crispy pork carnitas that you might normally see here from a fully braised pork shoulder, I like to prepare my pork chile verde almost like a roast that has been sliced - it's a lot easier to eat this way, and can lead to some satisfying texture in the meat. You're not looking to cook the connective tissue out too much so that it shreds, but to have a better chew, chunks even.
Prep (for the meat & stew):
Preheat your oven to 425 deg F and place the both the large cast iron skillet and the smaller one in the oven while it preheats.

Put the Dutch oven on a burner over medium heat.

Toss the tomatoes, garlic, tomatillos, onion, poblano pepper, and jalapeno in some neutral oil, salt, and pepper, and pop those in the large cast iron and let them blister and roast for 20-22 minutes, or until the tomatoes and tomatillos look like they're basically liquefied (or nearly there). Char is good here, so don't worry. You could totally also do this out on a grill for maximum flavor and roastiness. Your call, the weather is [potentially] getting warmer now.

While those are roasting, mix the spices, salt, and pepper into a rub and liberally coat the exterior of the pork butt with that. Feel free to use a dab of neutral oil to help lubricate anything. Sear the exterior of your pork butt in the cast iron, with the lid off. You should know you're not going to cook this whole thing via direct heat, so you're just looking for some color and extra flavor.

Prep (for the cornbread):
​Mix the coconut milk and lemon. Say it with me now: 'ACIDIC ENVIRONMENT FOR LEAVENING'. Good. Let this get soured and ready to get foamy.

​Whisk the flour, cornmeal, baking powder, and salt together.

Gently mix the coconut milk and egg with the cornmeal and flour mixture. Honestly, this is similar to pancake batter where you don't want to over-mix it for fear of a ton of gluten - I like a very crumbly cornbread texture, which is perfect for stews because it soaks up juices so much better and is conducive to eating (and subsequent cutting hearts out) with a spoon. Thanks, Alan Rickman.

Mix in the melted lard - you're coating the hydrated flour and egg proteins with a saturated fat here, this lubricates the dough and restricts the gluten network, leaving you with a much more tender cake/English biscuit texture. Exactly what I said above. [1] see citation below

Mix in the shredded 'cheese' and pickled jalapenos. Set aside.
​
The Business:
Okay, I'll admit it, the 'prep' and 'business' ends of this dish are really...connected. But here's where the real magic starts.

Blend your roasted veggies (and optionally the cilantro stems) together until more or less liquefied (the tomatoes should be already, but get those onions and peppers broken down). Mix this with the juice of the lime, your H2O or stock, and the beer. Drink the other half and get ready to enjoy like 5 more when you eat it. Deglaze (is it really deglazing though) the Dutch Oven with this mixture and place the pork back in the DO; you should be about 2/3-3/4 the way up the pork roast because you're braising this hunk of meat.

Cover and place the Dutch Oven into the oven for 30-35 minutes. The meat should be coming along nicely at the hot 425 deg ambient temperature.

Remove the lid (this is to encourage some of the liquid to evaporate for a thicker stew). Carefully swirl some shortening or lard in the bottom of the smaller cast iron skillet and pour the cornbread batter into it. Close the oven back and continue cooking both until the cornbread has a good crust on the bottom of it and is cooked through - use a toothpick or something. (This should take 20 minutes or so)

Remove everything from the oven, carefully. Feel free to evacuate the hunk of meat to a baking tray (or that dirty large cast iron skillet) to rest a bit. Stir the cilantro leaves into the stew. Decide now if you think the stew is the right consistency. It's your call - continue reducing on the stove over a gentle heat or add more stock or beer.

Drizzle some cooling coconut milk, squeeze some limes, and serve with black beans, the cornbread, and all the avocado your basic self can muster. Also, go eat this al fresco on your porch - it's peak summertime stew. Enjoy. 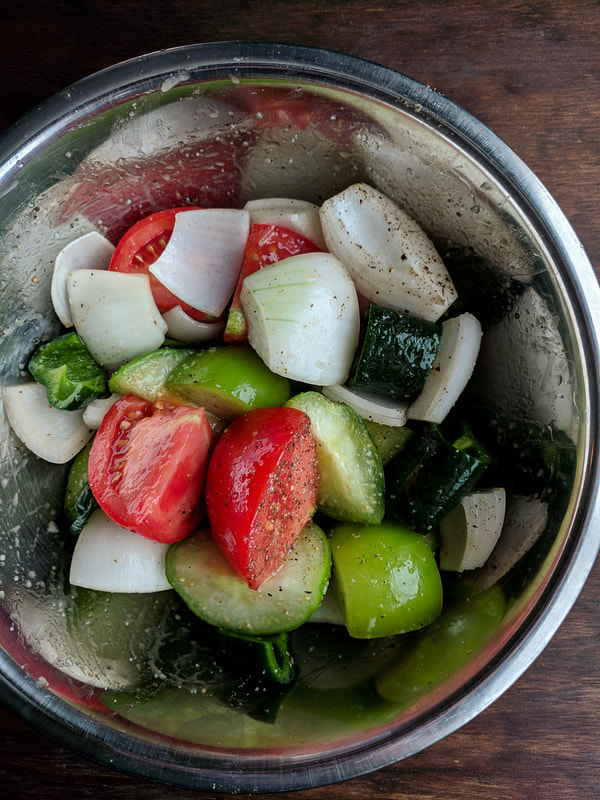