Kway Teow. Ho Fun. She Fen. Rice Noodles.
You've likely bought these dried as rice stick or thin rice vermicelli in your local ethnic grocery store or Asian aisle. But did you know that you can easily make these fresh with only a little bit of effort?
Prep (for the sen yai):
Mix the warm water, salt, canola oil, rice flour, and corn/tapioca starches in a bowl. A whisk will help. Then whisk in the boiling water.

Set aside for about 45 minutes, or while you setup your entire station for making rice noodles.

Fill the bottom of the pot with enough water to come up 2/3 to 3/4 of the way up the side of your baking pan sitting in the large pot.

Turn on your burner to start boiling the water that you have in the bottom of your pot. You should have a relatively healthy boil, but not one that makes the pan bounce around too crazy. Look, there's not much science to this. Above a simmer to be considered boiling, but not rolling like you'd have to boil pasta. You'll get the hang of it.

Sen yai are a somewhat delicate balance of cooking time and temperature - too short of a cook time and the starches won't set up. Too long and it becomes brittle. This all happens within the span of a minute or two from underdone to overdone. Watch your pot. Ignore that sage wisdom crap about never watching a pot - does that even apply here?

The Business:
Lightly brush the bottom of the baking pan with oil and CAREFULLY set on top of the ramekins in your...setup. We're officially calling this a setup now. Let the pan warm up for a minute or so, and carefully pour in roughly 1/4 cup of your soupy rice flour and water mixture. Swirl it around so it evenly coats the pan and

Cover the pot, and steam for 3 minutes. Remove the pan from the pot with some pot holders place the lid back on.

Brush the top of the cooked noodle mass with a little oil. Let the pan sit out on the counter for 2 to 3 minutes and start coaxing the now gelatinous hunk of rice noodles out of the pan with your rubber spatula. Try to keep it all in one piece, and if it breaks, it breaks. That may be a signal that you've cooked it too long, or have over-steamed these. You'll probably be stir-frying these anyway so it won't matter too much. Do take your time, though, as you want the water temperature to come back up afterwards anyway. Adjust water levels as necessary if it has boiled off.

Note: you could double up your working efficiency by using two identical loaf pans to rotate in and out, but maybe leave that until you're more experienced.

Then, slice the noodles to your desired width. You'll want to be using a clean (possibly wet) knife to do this, as the starch will begin to build up and catch on the side of the knife otherwise. Transfer the cut noodles to a bowl while you continue this process.

Using the 100g of rice flour stated above, this will make a relatively generous portion for a large stirfry - of which is pictured below as Beef Hor Fun. Notice how most of my noodles broke apart in the wok, but that's ok. I'm not perfect, and some of these were the product of different cooking times.

​At the top that is an example use in cheung fun, rolled rice noodle sheets stuffed with dried shrimp, scallions, and sesame, all doused in a rich dark oyster sauce. These are a traditional Cantonese dim sum - most of the time served as rolled-crepe form, but I opted to slice them open for dramatic effect. 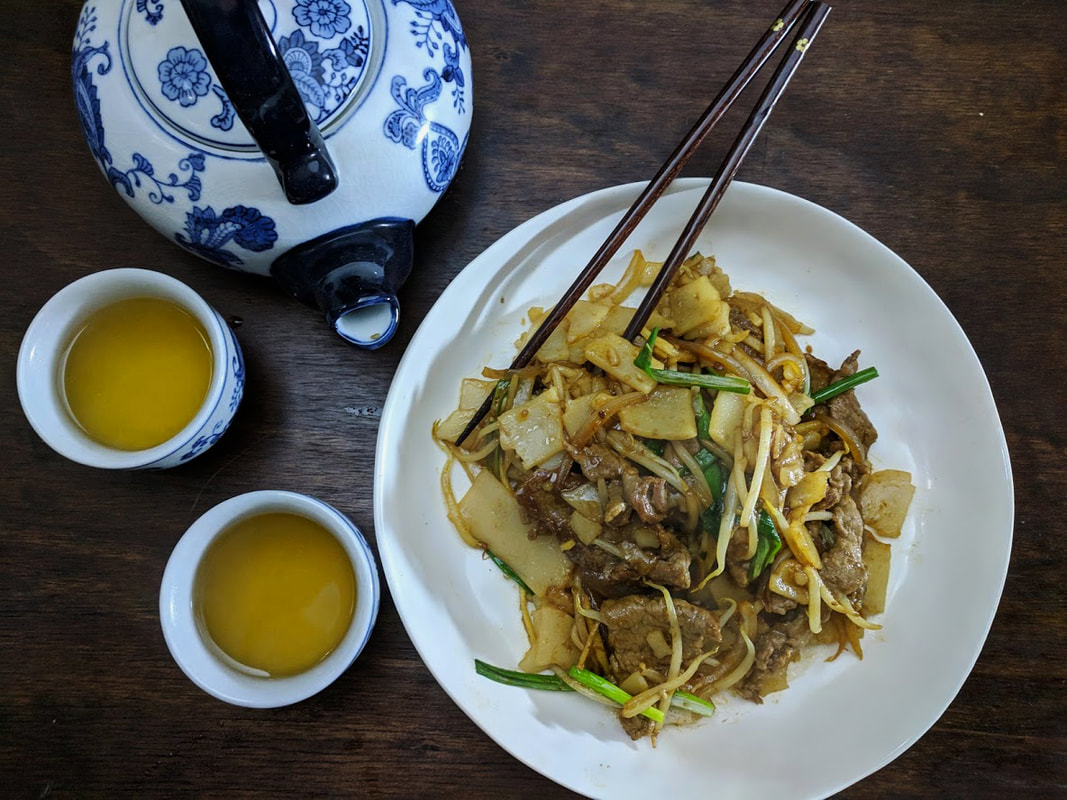