An all-purpose, hearty boule perfect for toasting and croutons.
This is definitely outside of my traditional wheelhouse for recipes. I rarely measure things, but fucking around with bread doughs is a great way to have bad bread, so, here we are: me measuring things. If you'll excuse me, I'm going to throw myself off a cliff.
Making your own bread for the week is a super rewarding way to finish out your weekend, or hell, even start your weekend. A traditional boule doesn't really need a whole lot of care or attention to it; loaves that you bake in a dutch oven can be adapted to be the 'no-knead' kind, which I'm not necessarily the best fan of, but hey, to each their own.
​
Shopping List: Hardware: 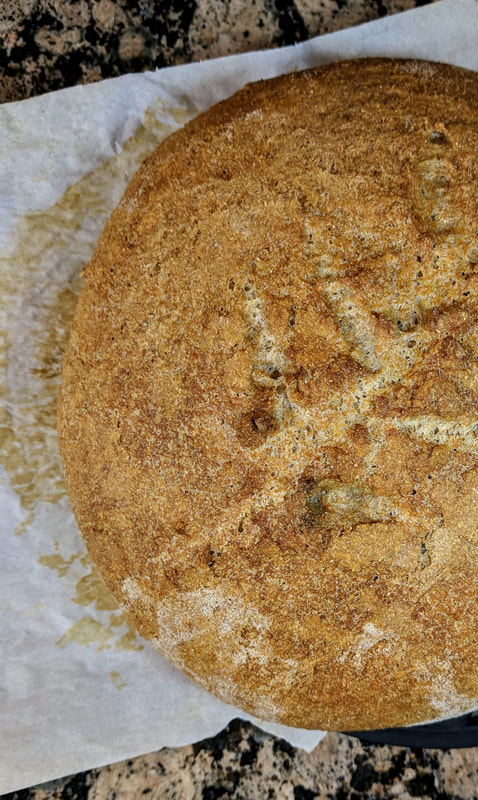 Prep:
Make sure your water isn't above ~120 deg F. You'll kill the yeast if it's too hot. That's a quick ticket to flat bread. That's also another post.

In the bowl of your stand mixer or even just a measuring cup, dissolve the teaspoon of sugar and whisk in the active yeast. There's a shell coating around many brands of active dry yeast that really just needs to be dissolved. Let that bloom for 5-10 minutes, or until it gets foamy, bubbly, and fragrant. You should know what yeast smells like when it's good to go. You know, like a bakery.

Whisk together the salt and flour. Get it all homogenized.

Turn your oven to preheat to 300 deg F. Set a timer for a minute or two and then turn the oven off. What you've created just now is an above ambient temperature proofing station. Unless it's summertime in the South you'll probably need this extra heat to help your dough rise.

Once the yeast is bloomed, slowly add in flour; I'll usually do this in 0.5 cup increments, but basically just don't dump it all in at once. It's almost like you're making pasta so a watchful eye is necessary to keep this stuff from drying out too much. The dough should be pretty rough since you're using whole wheat flour, but it should also pull away from the bowl and come together in a cohesive ball. Let the bread hook do its magic for 10 minutes or so. Walk away, make a coffee or something.

Turn the ball out onto a lightly floured surface; I say lightly here where other recipes would have you heavily flour it because...it's wheat bread - it's probably going to look a little rustic and you'll never get a nice, tight skin like you would with a traditional loaf made from pure bread flour. If you've been mixing the flour in by hand, be sure to knead for 5-10 minutes, or until your arm gets sore. Really get down into it for solid gluten development.

Try your hardest to get it shaped into a uniform ball and set it in a very lightly oiled (I'm talking nanometer thickness of oil) bowl. Nestle it in there and cover with the tea towel and place into the warm oven. Again, it should be a WARM oven, not a hot oven. Let this rise for roughly 80 minutes, or until it has doubled in size.

Cut off a piece of parchment paper large enough to fit comfortably inside your Dutch Oven. Somewhat carefully remove your risen dough from the bowl (if some of it sticks, it sticks, no big worry) and without punching it down too much, form it into a ball or shape that you'd like to bake it on the parchment. Trim down the paper if you need to. This is very optional, but if the paper folds on top of the loaf while it's baking, that'll be not good.

This is the time and place to score a stereotypical pattern onto the top of your loaf. Pretend it's a very harsh and true character flaw about yourself - cut deeper than you think you'll need to ensure good definition in your pattern after baking.

Re-cover the loaf with the tea towel (flour it before you do so stick-age doesn't occur).

The Business:
It's time to make Oven-ception. Take your Dutch Oven and put it into your traditional oven (lid on, please). Preheat to 460 deg F.

Once the oven is at 460 deg F, carefully remove the DO from the O and very carefully drop your loaf into the bottom. You might hear some sizzling, and this is good. Nobody likes soggy/soft bottom crust.

Before you lid it up, spritz the top of the loaf with water or optionally just pretend you're some Christian denomination (I'm going for a sprinkling joke here folks) and quickly sprinkle some water over the loaf. Cover and place in the oven for 30 minutes.

After 30 minutes are up, remove the lid and give it another spritz of water (or sprinkle if you want). This time, leave the lid off, and place it back in the oven.

You should now be rewarded with a wonderful smell in your apartment for the next two or three hours as well as, you know, the intended loaf of bread.

Let it cool completely before you slice into it, you animal. It's tempting.

You're now ready to put this crusty, textured, dense bread to use. I'd suggest French Toast if you don't like Challah egg breads, it makes great toast for open faced avo toast (you filthy hipsters), as well as torn up and re-toasted for crouton-y goodness in salads. Because if salads need ONE thing, it's bread. 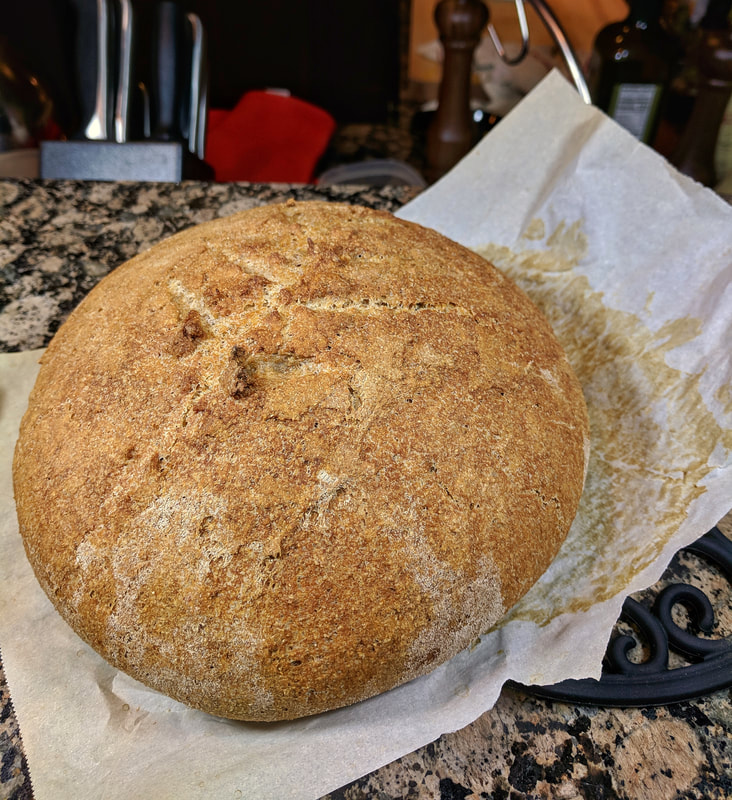